I love the Staples slogan..."That was Easy."  Many things in life sound easy, but are in fact really hard to do.  You read stories and watch movies about them and, within just few short pages or hours, the hero/heroine has conquered insurmountable odds, changed their lives and others, and become the hero/heroine.  But it's not really that easy in real life.  2 things recently in my life have been that way.

First, if you don't know, I am a member of the Church of Jesus Christ of Latter-day Saints (a Mormon).  In our church, we have this crazy tradition of sending our sons and daughter, (and sometimes our parents) on these 1 & 1/2 or 2 year missions.  These missions allow them to share their testimonies of Jesus Christ with others and invite them to enter in by the strait gate of baptism.

My daughter, Bonnie McDougal, served an 18 month mission in Mexico.  She was so excited to go, and knew it would be an amazing experience.  When she arrived in Mexico, however, homesickness came to visit, and here she was in a strange country with strange customs and a strange language that she didn't know yet with a Spanish-speaking companion (missionaries always have a companion with them at all times).  She struggled with difficult companions and with homesickness and depression. However, with the thorns came the rose of the joy she experienced as she shared her growing testimony of the Lord Jesus Christ. 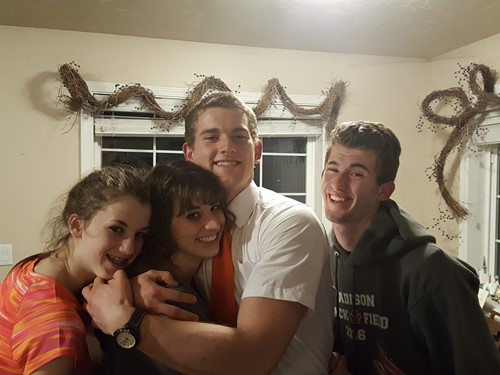 My son, Dallin McDougal, was getting ready to leave on one of these missions to Zimbabwe, Africa.  He was supposed to leave this week to travel to the Missionary Training Center in Johannesburg, South Africa.  We didn't know when he would leave.  Last week, we received an email that his visa had not arrived and he would need to report on Wednesday to the Missionary Training Center in Provo instead.

Monday morning at 10:30 am, we received a call informing us that the visa had arrived and Dallin was supposed to fly out of Idaho Falls at 6:30 am the next morning.  Whoa, Nellie.  Dallin now only had less than 1 day to complete what he thought he had 2 days to do.

Dallin went to the credit union and got a new credit card and debit card issued that had expiration dates past the dates he would be done with his mission. He had them out to call the credit card company and alert them of his stay in Africa. He left them on the kitchen table.   That should be safe in your own home, right?

Now to the other thing that looks easy, but in fact is quite hard.  We have 2 foster children living with us right now, an 18 month-old and a 4 year-old, both girls.  The younger one deals with health problem and anger.  The older one can be sweet, but also really rude.  It has been a struggle for our whole family to be patient and loving 24 hours a day, 7 days a week.  One of the hardest things for my kids is that they don't get as much time with me.  Take sibling rivalry and square it!  Yep, it's hard, but ask me sometime, and I can tell you the blessings that have come with it, too.

One of the things we have been working on since the four year-old came 4 months ago is respecting others property.  She has a tendency to take anything she wants... Back to the story: We got up Tuesday morning and left the house with plenty of time to make it to the airport. We were turning left onto the freeway when Dallin said, "I don't have my credit cards."  Ray flipped a U-turn instead and we rushed back to the house.  Dallin looked through his wallet and his passport holder again, but could not find it.  He was in the house for 5 minutes and came back out reporting that it wasn't anywhere.  And we started looking...and I prayed hard. We asked all the kids if they had seen them, and they got up and started looking, too.  We searched his luggage and the house, including the garbage.  I received an impression to ask the 4 year-old.  I did.  I woke her up and asked her.  She told me she hadn't seen them.  The impression had been strong enough that I went through her dirty clothes and looked in all her favorite hiding places in her room.  No cards.

We were so panicked, we hadn't really been watching the clock...oh no!  We needed to hurry or we would miss the plane!  We hopped back in the car and took off toward the airport.  I gave Dallin my debit card and all the cash I had in my wallet.

We got to the airport with only 20 minutes before the flight and were told that Dallin could no longer check in.  Buuu...thats the sound when a big rock carried my stomach all the way down to my toes. I was sick. We discussed trying to make the next flight in Salt Lake while Dallin was calling Missionary Travel Services.  They rescheduled him for another flight out of Salt Lake going to Atlanta.  It would make it in time for him to catch his flight to Johannesburg.

Ray went home to get the kids to school, and take the little foster girls to daycare. Then he could go to work. I would take Dallin to the airport in Salt Lake.. We still were on a tight schedule to make it on time.  I was pretty tired after getting only 2 hours of sleep (helping Dallin finish up packing), but I was blessed to be alert and drive safe.  We arrived at the airport in Salt Lake, checked in his bags, and still had an hour and a half before flight time...whew!  We made it! Dallin and I at the Salt Lake airport...yes, I am really bad at selfies.

I watched Dallin go all the way through airport security and walk off towards the gate.  I knew he was scared, and I was scared for him. I drove home and proceeded with all the craziness of my everyday life.  In my spare minutes, I went through the garbages again, searched here and there, still looking for those elusive cards.  In the back of my mind, I thought they must be in his luggage somewhere.

I was doing laundry on Wednesday.  I was taking the foster girls clothes out of the dryer and found 2 credit cards...I asked the 4 year-old about them, and she confessed she had taken them off of the kitchen table...and stuffed them in her pajamas.  Obviously, the theft had happened later than I thought...I would have never dreamed I would have to do a pat-down on a 4 year-old.

I believe everything in our lives happens for a reason.  Two blessings that came from crazy turn of events.  First, I was privileged to spend 4 extra hours with my scared, nervous son.  He was vulnerable and was willing to open up and share his feelings...which hardly ever happens.

Second, instead of my last sight of him being a race through the airport to barely make a flight, I saw a scared, nervous young man who gave me a long hug, then resolutely said, "I'm going to go now."  He squared his shoulders and walked into airport security with faith and courage.